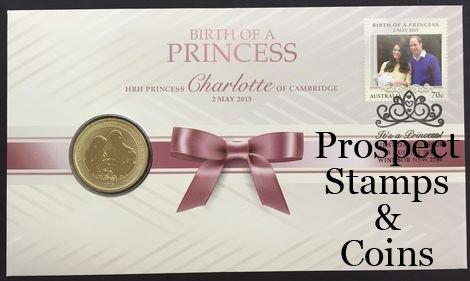 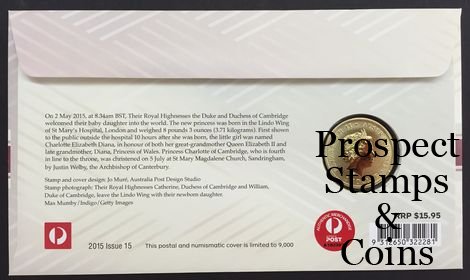 Her Royal Highness Princess Charlotte Elizabeth Diana was born on 2 May 2015 at Saint Mary’s Hospital in London weighing 3.7 kilograms. She is the second child of Their Royal Highnesses the Duke and Duchess of Cambridge and a great granddaughter of Her Majesty Queen Elizabeth II.

In keeping with tradition, the birth of Princess Charlotte was greeted by a 41-gun Royal Salute in Hyde Park, and a 62-gun salute at the Tower of London. A proclamation of the Royal Birth announcing her arrival was displayed on a gilded easel outside the gates of Buckingham Palace

The Perth Mint and Australia Post are honoured to commemorate the occasion with the release of a stunning stamp and coin cover, which is set to be a timeless reminder of this historic birth.

The coin’s reverse depicts a sculpted portrait of the Duke and Duchess of Cambridge cradling and gazing lovingly at their newborn baby, with HRH Prince George by their side. The image is encircled by a sculpted ribbon tied in a bow.

The coin is presented in a specially designed stamp and coin cover.