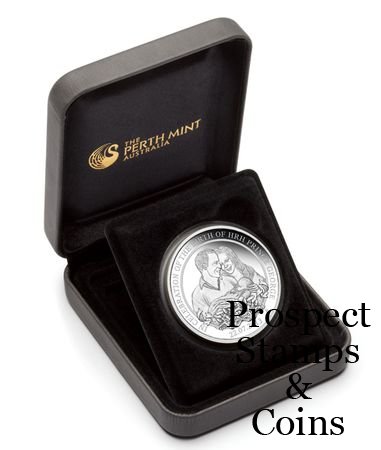 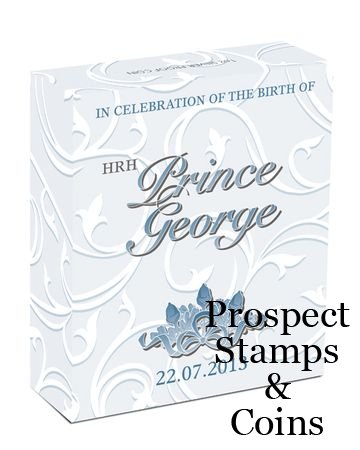 The new Prince is third in line to the throne after his grandfather and heir apparent Charles, Prince of Wales, and his father Prince William, The Duke of Cambridge.

In keeping with tradition, a proclamation of the Royal birth was displayed at the gates of Buckingham Palace. The arrival of Prince George was also celebrated by a 41-gun salute performed by the King’s Troop Royal Horse Artillery in Green Park and a simultaneous 62-gun salute was executed by the Honourable Artillery Company and the City of London’s Army Reserve Regiment from Gun Wharf at the Tower of London. To coincide with this grand military observance, sounds from the bells of Westminster Abbey enriched the reception.

The coin’s reverse depicts a sculpted portrait of The Duke and Duchess of Cambridge cradling and gazing lovingly at their newborn baby. The image is encircled by a ribbon tied in a bow supported by a delicate bouquet of acorns and fleur de lys – symbols from The Duke and Duchess’ Coats of Arms. The inscription IN CELEBRATION OF THE BIRTH OF HRH PRINCE GEORGE, the birth date

Each coin released by The Perth Mint is housed in a classic grey presentation case, and presented in a blue-washed box-shipper featuring the same bouquet of acorns represented on the coin’s reverse. Metallic lettering completes the luxurious feel.
Each coin is accompanied by a numbered Certificate of Authenticity.