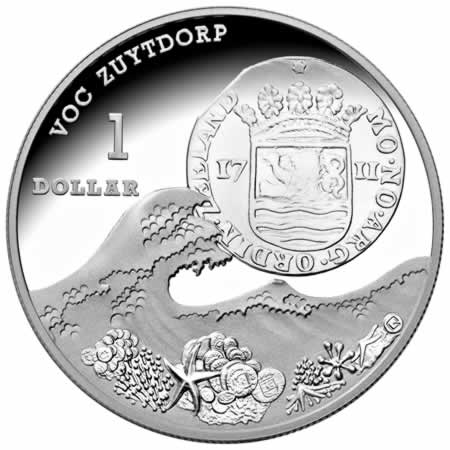 The story of the Dutch East India Company ship VOC Zuytdorp is as intriguing as any detective mystery. One of four East India Company vessels known to have wrecked off the Western Australian Coast, it is the only one from which no survivors managed to report the event. The VOC Zuytdorp left the Netherlands in August 1711, bound for Batavia, or modern-day Jakarta.

She carried 286 people and a cargo of trading goods and silver coins, including 3- and 6-stuiver pieces minted that same year. The ship met its rocky end south of Shark Bay, during the winter of 1712.
Artefacts from the wreck of the Zuytdorp were first discovered on sea cliffs in 1927 by local stockman, Tom Pepper. These and other land artefacts provide evidence of survivors. It wasn’t until 1954 that any clues about the ship’s identity were discovered, when Pepper told geologist Phillip Playford about the site, who proceeded to uncover coins marked ‘1711’ in the vicinity. It was these that pinpointed the Zuytdorp. Braving the location’s treacherous conditions, a diving expedition led by Tom Brady in 1964 finally discovered the wreck itself, and later a ‘carpet of silver’ formed by the ship’s gleaming coin cargo.
The Western Australian Museum has been responsible for the site since 1969, and despite many efforts to secure the wreck and recover its bounty, it has fallen victim to looting and vandalism. Research into the Zuytdorp wreck and the fate of its likely survivors continues today.

The reverse design shows a representation of one of the coins found on the shipwreck with the artist impression of where coins on the Zuytdorp may have come to rest.

Coin comes with a numbered certificate and display case.