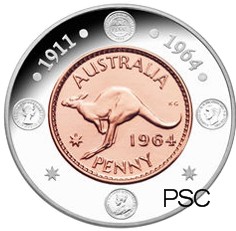 The eighth release in the acclaimed subscription series from the Royal Australian Mint celebrates a milestone in Australian history.

This $1 silver proof coin commemorates the end of minting of the Australian Penny.

The famous Kangaroo design that dominated the reverse side for 26 years from 1938 to 1964 is the honoured focus point of the collector coin. Included on the design around the central image are the three previous effigies of King George V, King George VI and Queen Elizabeth II.

Combining innovative design and cutting edge production techniques from the Royal Australian Mint the 2004 coin creates a most worthy addition to the Subscription series.

Final mintage will be determined by the response of collectors, and included in the accompanying Certificate of Authenticity signed by the Controller of the Mint.