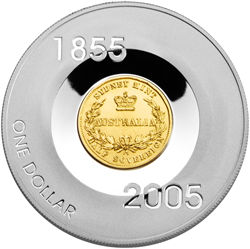 The anticipated ninth release of the Royal Australian Mints Subscription Series highlights both an Australian and numismatic milestone – it is a unique blend of the old and the new.

This coin celebrates 150 years of the Sydney Mint, by honouring one of its most celebrated coins, the 1855 Half Sovereign.

The 1855 Australian sovereign and half sovereign were the first sovereigns to be minted outside Britain. They were introduced at a time when the Gold Rush was shaping Australia's future and when there was a shortage of coins throughout the British Empire.

With the reproduction of this extremely rare masterpiece, in an exciting new setting, collectors have the chance to own a unique part of Australian history. The original 1855 Australian half sovereign has become one of the most sought after coins in the world. Whilst 21,000 were minted in 1855 few survived in good condition fuelling demand for one of the most desirable Australian coins in history. The coin incorporates both frosted and proof finishes.

It is made in fine silver (99.9%) with a proof finish to further emphasis the gold plated depiction of the 1855 Sydney Mint Half Sovereign.

The coin is beautifully housed in a display case, with packaging that complements the tone of the coin.

The 2005 Subscription Coin comes with a Certificate of Authenticity which details the specifications and final mintage number.