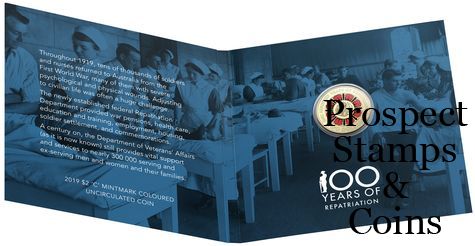 The 2019 Lest We Forget Coloured two dollar 'C' mintmark uncirculated coin recognises the 1919 Australian Repatriation Department, which undertook the massive task of repatriating Australian servicemen and women after the First World War.
Tens of thousands of servicemen and nurses were provided with vital support and services.

This uncirculated coin also bears the "C" mintmark and is presented in a folded card.