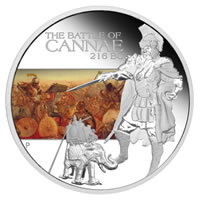 The Second coin commemorates Hannibal's crushing defeat of the Roman legions in 216BC. Against a massive force comprising 80,000 infantry and 6,000 cavalry, his outnumbered Carthaginian army won a remarkable victory that has been hailed as one of the greatest tactical achievements in military history.

The coins design depicts a Carthaginian warrior and one of Hannibal's 30 war elephants, which famously crossed the Alps with his army.