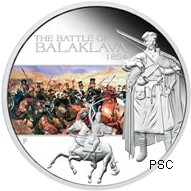 The Perth Mint's famous battles in history series portrays battlefield scenes spanning more than two millennia. These coins focus on five notable engagements that changed the course of history.
The fourth coin in this series marks the Battle of Balaklava 1854, where the courage of the British heavy Brigade and the Thin Red Line was overshadowed by the military blunder immortalized in Alfred Tennysons. The charge of the Light Brigade. Baklava served as a supply port for Britain and her allies during the Crimean War. Having resisted a Russian attempt to capture the town, the British Light brigade was ordered to disrupt their withdrawal.