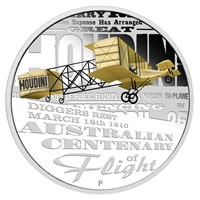 Australia had much to gain from the development of successful flying machines at the beginning of the 20th century. To promote interest in aviation, the Australian Aerial League invited Harry Houdini to demonstrate his flying skills while on tour here in 1910. The famous escapologist took-off at Diggers Rest, near Melbourne, on 18 March. This spectacular aviation commemorative celebrates the 100th anniversary of successful flight in Australia. The coin comes with a Numbered Certificate of Authenticity and is limited to a mintage of 7,500 coins being released. The coin is housed in a presentation case and illustrated shipper depicting Houdini's bi-plane.