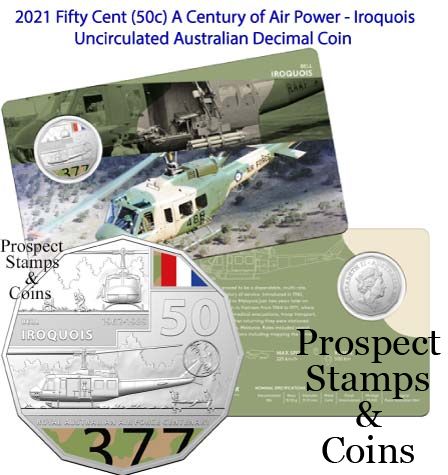 This unique collection of coins commemorating some of the Royal Australian Air Force’s most iconic aircraft over its hundred-year history will delight personnel, veterans and aviation enthusiasts alike.

The air force has always been on the leading edge of technology - from wood and fabric aircraft of the 1920s to the advanced fifth-generation F-35 Joint Strike Fighters of today.

This collection traces the evolution of technological advances in air power - beginning with one of the most famous allied fighters of the
First World War the S.E.5a in which Australian Flying Corps pilots flew in operations over the Western Front.

By the 1940s Australia had graduated to the long-range Catalina flying boats, heavy bombing Lancasters and Kittyhawk fighters which dominated battles in the Pacific.

The Iroquois ‘Huey’ helicopters came into their own during the Vietnam War. In more recent times the F-111s have been Australian crowd favourites, serving the air force for 37 years including overflights during the East Timor crisis in 1999.

The reliable Hercules tactical air-lifters have been a mainstay of the air force since the 1950s, conducting domestic and international operations including evacuating people during the 2011 Queensland floods.

The Hornet fighters saw action in the Middle East while the F-35 Joint Strike Fighters are being welcomed into the fold.