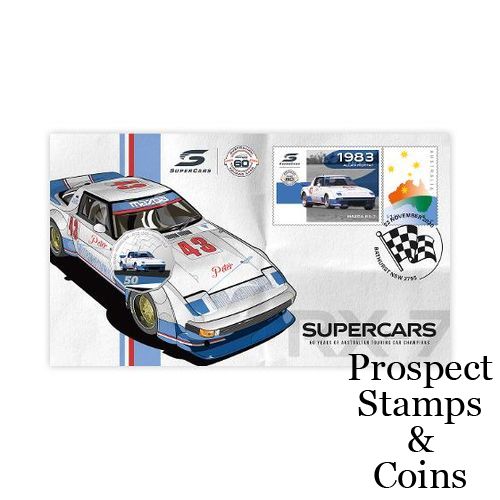 The Mazda RX-7 postal numismatic cover is limited to just 6,500, featuring a pictorial envelope with the stamp and Mazda RX-7 tab from the 60 Years of Supercars stamp pack and an uncirculated coin from the Royal Australian Mint.

Allan Moffat was Ford’s main man throughout the 1970s, firstly in his distinctive Trans-Am Mustang and later in a succession of Falcon V8s, winning three ATCC titles during that time. Then in the 1980s, after a long campaign to race the Mazda RX-7 in Australian touring car racing, the Canadian-born racer took to the wheel of this little 1.2-litre rotary-powered sports coupe from Japan.

Moffat’s speed and determination, combined with the nimble handling of the lightweight Mazda, proved a formidable match for his V8-powered rivals, holding them off to secure his fourth ATCC title in 1983.