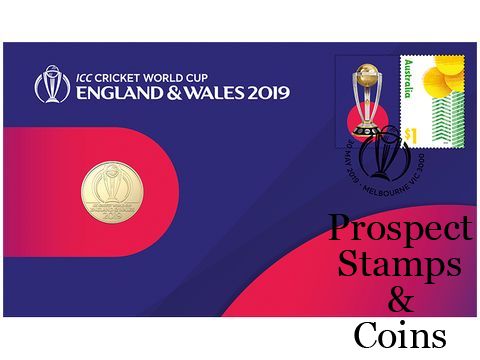 An official ICC Cricket World Cup 2019 product created, struck by the Royal Australian Mint and packaged by Australia Post - this one dollar coin is a must-have for all Australian cricket fans.

The design incorporates the official ICC Cricket World Cup logo, this one dollar uncirculated coin will be sort after by cricket fans and dollar coin collectors. Limited to a mintage of just 4,500 stamp and coin covers being released

In 2019, 10 leading nations in the cricketing world converge on England and Wales, competing for cricket’s most coveted limited-overs trophy in a format that pits every nation against each other over the course of six weeks. Will Australia, winner of five previous World Cups, continue its dominance of the tournament, or will England, which follows Australia’s suit, triumph on home turf? Virat Kohli and MS Dhoni, two of the game’s greatest ever limited-overs champions, will shoulder the hopes of more than a billion compatriots as India seeks its third World Cup. In the meantime, New Zealand and South Africa both search bravely for a maiden victory – and they have the squads to prevail. With 48 matches held at 11 hallowed grounds across England and Wales, one thing is certain – the cricketing world is in for a truly memorable exhibition.