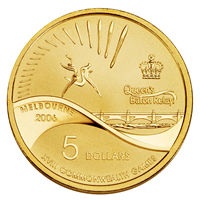 The baton will be carried across the globe - over land, air and sea - by thousands of relay runners and on many different modes of transport. The revolutionary baton contains state-of-the-art technical features, including two tiny ‘baton cam cameras, a microphone and a global positioning system to track the batons location at all times.

The coin is selectively frosted to futher enhance the features of the design.