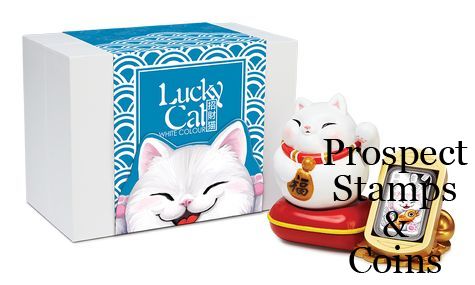 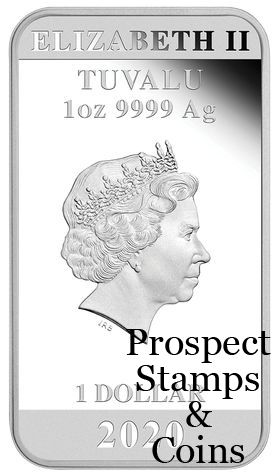 The ‘lucky cat’ or the ‘beckoning cat’ is a talisman believed to bring good luck to its owner. Known as the ‘maneki-neko’ in Japan, the lucky cat originated from a Japanese legend dating back to the 17th century. According to the story, a stray cat named Tama was taken in by a temple priest in a village near Edo (now Tokyo). The cat was said to have saved a samurai lord and his men from being struck by lightning by raising its paw and beckoning them toward him. Tama was honoured with a statue in the temple cemetery when he died.

The story of Tama subsequently spread throughout Japan and across the sea to China. Lucky cats are now popular symbols of good fortune throughout the world.

A lucky cat with its right paw raised is believed to attract prosperity and good fortune. White cats symbolise happiness and purity.

Struck by The Perth Mint from 1oz of 99.99% pure silver in proof quality, the coin is issued as legal tender under the authority of the Government of Tuvalu.

The coin's reverse depicts a caricature of a white lucky cat with its right paw raised against a background featuring representations of traditional coins and the Chinese characters for ‘abundant year after year’. The cat is holding a carp which is symbolic of abundance and fortune

The coin is delivered in an amazing presentation case featuring a figurine of a lucky cat waving its left paw. The case sits within a themed box and is accompanied by a numbered Certificate of Authenticity