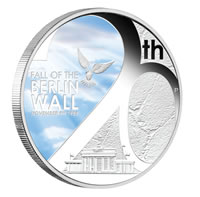 This coin celebrates the 20th anniversary of the fall of the Berlin Wall.
The Berlin Wall was built to prevent defectors escaping to the free world via West Berlin. On 9th November 1989, the East German Government announced that restrictions on travel to the west were to be lifted. As the gates of the Berlin wall were flung open, West Germans joined in wild celebrations, their euphoria marking the end of the cold war amid reunification of their country.
Many parts of the Berlin Wall were reduced to rubble by sledgehammer weilding souvenir hunters and those intent on its physical destruction.

The Perth Mint has released this 1oz silver proof coin under the Government of Tuvalu, it comes with a numbered certificate and presentation case.

This wonderful coin is extremely limited to only 5,000 coins.