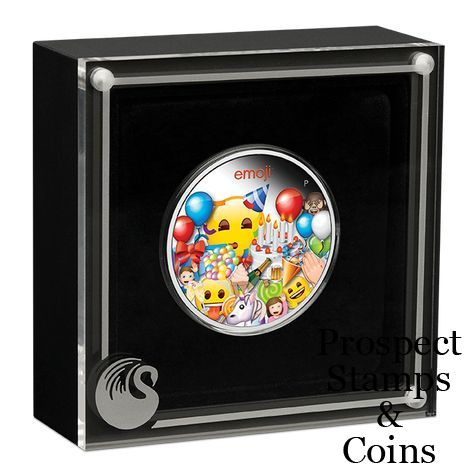 emoji™ icons are popular symbols through which we convey our emotions in the digital age. Colourful, fun and creative, emoji™ icons encompass a variety of categories including figures, animals, food, places, activities, objects and symbols. Used primarily in electronic messages, their name is derived from the Japanese words ‘e’, meaning ‘picture’ and ‘moji’ meaning ‘character’. Now considered part of pop culture, emoji™ icons have become increasingly popular worldwide since the 2010s when several mobile operating platforms adopted them.

The coin is struck by The Perth Mint from 1oz of 99.99% pure silver in proof quality and issued as legal tender under the authority of the Government of Tuvalu.

The Perth Mint will release no more than 5,000 of the emoji™ Celebration 2020 1oz Silver Proof Coin.

The reverse of the coin depicts popular emoji™ icons relating to celebrations including the face with party hat, the party popper, the birthday cake, balloons, drinks, the unicorn, the monkey and the person raising hand emoji™ icon. Also included in the design is the emoji™ logo.