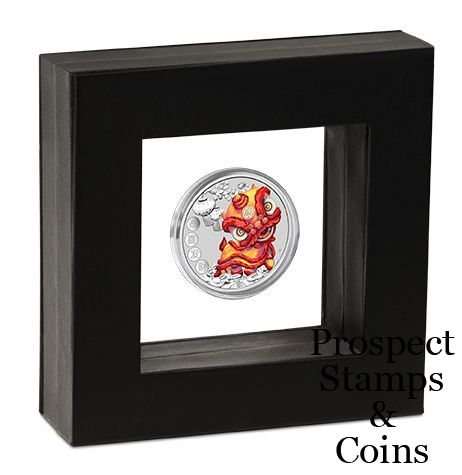 Chinese New Year is one of the most important celebrations for Chinese people across the globe. It is a time for families to reunite, as well as honour deities and ancestors.

During Chinese New Year and other traditional, cultural and religious festivals, the Chinese lion dance is performed to bring luck, fortune and prosperity into a community.

Chinese folklore depicts the lion as a symbol of courage, stability and prosperity. Incidentally, lions are not native to China. Dating back to the Han Dynasty (206BCE to 220CE) in China, the lion dance is traditionally performed to music made up of beating drums, cymbals and gongs to fend off ghosts and evil spirits thought to be afraid of loud noises.

The Perth Mint will release no more than 5,000 of the Chinese New Year 1oz Silver Coin.

The reverse of the coin features a coloured representation of a Chinese lion dance with ancient Chinese coins, flowers and lanterns. Also included in the design are the Chinese characters ‘恭喜发财’, a common phrase said to wish one a happy and prosperous New Year,

The coin is housed in a clear latex display case with a black frame, packaged within a beautifully illustrated shipper and accompanied by a numbered Certificate of Authenticity