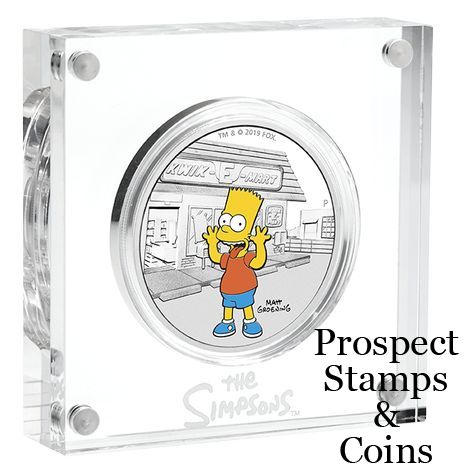 First introduced in 1987, the Simpson family originally appeared in 30-second segments on The Tracey Ullman Show. Two years later, The Simpsons premiered as a half-hour series and instantly became a worldwide pop-culture phenomenon, now seen in 60 countries in 20 languages.

In 2018, The Simpsons reached an incredible milestone becoming the longest-running primetime scripted show in television history.

The coin’s reverse portrays a coloured image Bart Simpson against a backdrop of Springfield’s local convenience store, the Kwik-E-Mart

Each coin is presented in a clear acrylic case, allowing both sides of the coin to be displayed, and is packaged within a themed shipper. The coin is accompanied by a numbered Certificate of Authenticity.

Due to limited allocation - Limit of 1 coin per order / Household.

Orders will be checked and cancelled without notice.