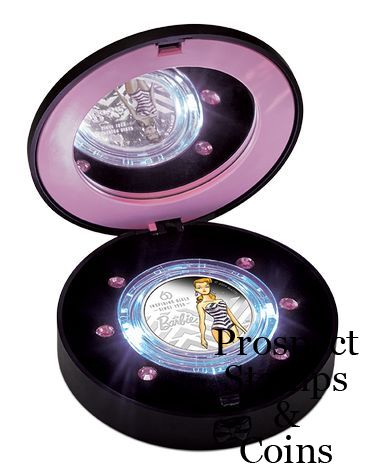 One of the hottest selling toys and collectables of all time, Barbie™ doll was unveiled to the world by Ruth Handler, joint founder of Mattel, at the 1959 New York Toy Fair.

Barbie’s™ original outfit was a black-and-white striped swimsuit. As a teenage fashion model she epitomised 1950s glamour with her ponytail, hoop earrings and vintage sunglasses.

Sixty years after her debut, Barbie™ remains not just a best-selling children’s pastime, but also a remarkable collectable.

The Perth Mint will release no more than 5,000 of the Barbie™ 60th Anniversary 2019 1oz Silver Proof Coin

The coin’s reverse portrays Barbie™ in her first swimsuit outfit, the Holy Grail for all Barbie™ collectors. Included in the design is Barbie’s™ official 60th anniversary logo, including the words ‘INSPIRING GIRLS SINCE 1959'.

Each coin is presented in a special edition Barbie™ themed display case in the style of a compact mirror, which
lights up when the lid is opened. Each coin is accompanied by a numbered Certificate of Authenticity.

BARBIE™ and associated trademarks and trade dress are owned by, and used under license from, Mattel. ©2019 Mattel. All Rights Reserved.