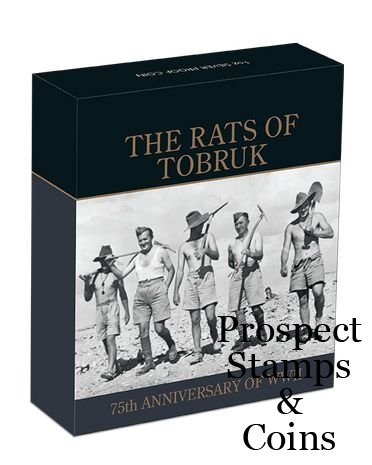 The year 2016 marks the 75th anniversary of the Siege of Tobruk, one of the first major battles of World War II. A small town on the Libyan coast, Tobruk was central to much of the fighting that took place in the Western Desert. The town became a key naval outpost due to its location on a sheltered, deep water harbour.
The Siege of Tobruk took place between April and December 1941. Australian troops made up more than half of the Allied presence in Tobruk, with more than 14,000 men from the Australian 9th Division and the 18th Brigade of the Australian 7th Division, commanded by Lieutenant General Leslie Morshead.

The coin’s reverse portrays two Australian troops in the trenches during the Siege of Tobruk. The design includes the inscriptions 75th ANNIVERSARY OF WWII and THE RATS OF TOBRUK

Each coin is presented in a classic grey Perth Mint display case within an illustrated shipper, and is accompanied by a numbered Certificate of Authenticity.