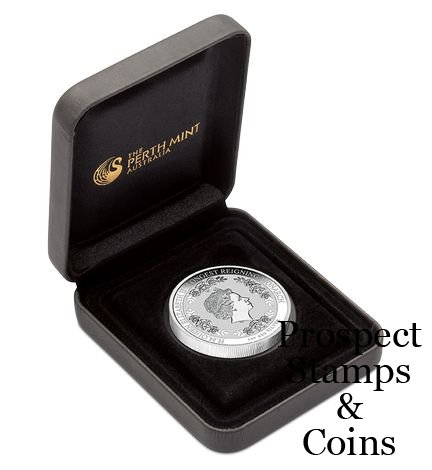 Queen Elizabeth II is Britain’s 40th monarch since William the Conqueror was crowned in 1066. Her coronation took place on 2 June 1953, more than a year after the death of King George VI. On the 9th September 2015 Queen Elizabeth II will pass a historic milestone, becoming the longest reigning monarch in British history. She will bypass the previous record of 23,226 days, 16 hours and 23 minutes (63 years and seven months), set by her great-great grandmother Queen Victoria.

The 1oz silver coin is struck by The Perth Mint from 99.9% pure silver with a unique intaglio style finish on both the reverse and obverse.

The Perth Mint will release no more than 5,000 of The Longest Reigning Monarch Queen Elizabeth II 1oz Silver Intaglio Coin.

The coin’s reverse depicts an incused version of the Ian Rank-Broadley effigy of Her Majesty Queen Elizabeth II surrounded by a pattern of Tudor roses.

The intaglio is an artistic technique commonly associated with sculpture, whereby an image is created by cutting, carving, or engraving into the surface.

The 1oz silver and 1/4oz gold coins are presented in a classic Perth Mint display case and an illustrated shipper, and are accompanied by a numbered Certificate of Authenticity.