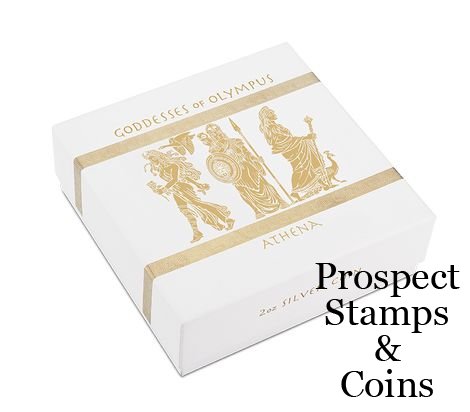 The second coin in the exciting new Goddesses of Olympus coin series features Athena, the Goddess of Wisdom and the patron of the city of Athens. Athena represented courage, inspiration, law and justice, mathematics, strength, strategy, arts, and crafts. She was also considered the Goddess of War and a companion of many heroes including Odysseus, Jason, and Heracles.

Struck by The Perth Mint from 99.9% pure silver, the coin is issued as legal tender under the authority of the Government of Tuvalu.

The Perth Mint will release no more than 2,000 of the 2015 Goddesses of Olympus – Athena 2oz Silver High Relief Coin.

The reverse of the coin depicts Athena next to an olive tree, wearing an aegis and holding a large spear in her left hand, and her shield in her right hand. She is accompanied by a serpent and an owl, with the Parthenon and ancient Athens in the background.

To capture the depth and detail of the design, the coin is struck in high relief to a rimless format and features an antique finish, which gives the coin an aged affect.

The coin is housed in a prestigious round wooden display case, with stunning detail on its lid and packaged in a beautifully illustrated shipper.