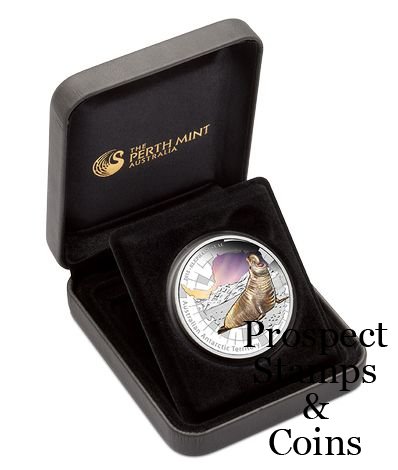 The twelfth coin from this amazingly popular series is struck from 1oz of 99.9% pure silver in proof quality and features the Elephant Seal.

The Southern Elephant Seal is the largest seal in the world and the largest member of the order Carnivora, which includes all seals, cats and dogs, raccoons and foxes, wolves and hyenas, bears, and weasels and civets, among others.

The male Elephant Seal can grow to more than six metres in length and weigh up to 4,000 kilograms. This species of seal takes its name from its great size and the large proboscis of the adult male, a trunk-like, inflatable snout which is used to make extraordinarily loud roaring noises, especially during the mating season.

The Perth Mint will release no more than 7,500 of the Australian Antarctic Territory Series – Elephant Seal 2015 1oz Silver Proof Coin.

The coin’s coloured reverse depicts a roaring Elephant Seal sitting on land within an outline of Antarctica.

The coin is housed in a grey display case, which comes within a stylish outer shipper, and accompanied by a numbered Certificate of Authenticity.