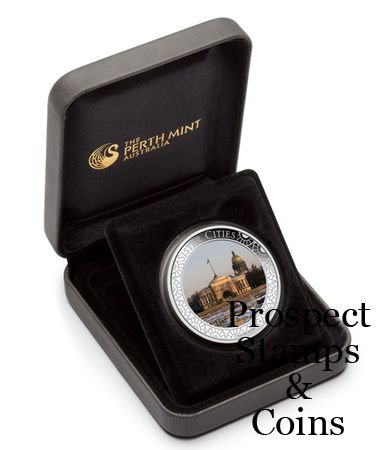 The sister city relationship between St Petersburg in Russia and Melbourne in Australia began on 21 April 1989 and is the only cooperative partnership between cities in these two nations. Created to promote cultural, educational and sporting exchanges, and exclusive business arrangements, the alliance continues to strengthen.

The coin’s reverse features a coloured image of an iconic landmark in each of the Sister Cities. The Admiralty building of St Petersburg, which faces the Neva River, is shown with Isaac Cathedral in the background. The front façade of Flinders Street Station in Melbourne is also depicted with a passing tram.
With the use of lenticular lenses, these images transform from one to the other as the coin is moved. The design is headed by the inscription SISTER CITIES and surrounded by decorative bands inspired by the architecture of each landmark.

Accompanied by a numbered Certificate of Authenticity, the coin is housed in a display case and wonderfully illustrated shipper featuring the ANDA logo alongside the dates of the Melbourne show.