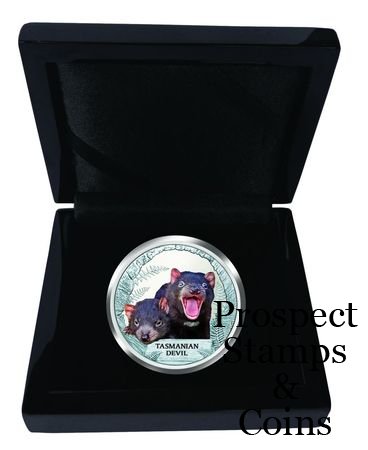 A spectacular addition to one of Australia's hottest coin programs, we are delighted to present the latest in the Perth Mint-struck Australian Extinct & Endangered Series – the 2013 $1 Tasmanian Devil 1oz Silver Proof.

Known for its powerful bite, loud, disturbing screech and ferocious eating habits, the Tasmanian Devil (Sarcophilus harrissi) is the largest carnivorous marsupial in the world. Once common across Australia, the Tasmanian Devil disappeared from the mainland around 3,000 years ago, with the proliferation of dingoes believed to be the key cause.

Found in the wild only in the 'dingo-free' Apple Isle, and noted as scarce as far back as the 1850s, the Tassie Devil population has suffered a massive 80% decline since the mid 1990s due to Devil Facial Tumour Disease, and the species is listed as endangered.