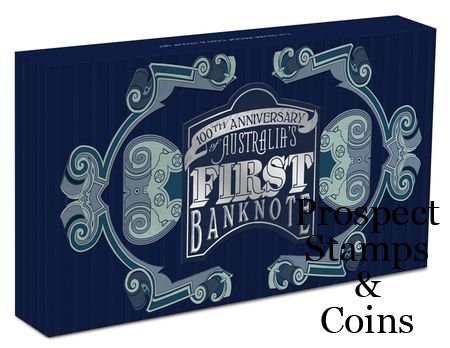 The Perth Mint and Australia Post are pleased to present a joint special release celebrating the 100th anniversary of the first banknote in Australia, for the Australia 2013 FIP World Stamp Exhibition to be held in Melbourne 10-15 May 2013.

The first Australian currency note, the ten shilling denomination was produced in May 1913, and a ceremony to number the first note took place at the Kings Warehouse at that time. Other denominations from £1 to £1,000 followed during the years 1913–1915.

The coin’s reverse features a coloured representation of Australia’s first ten shilling banknote. The inscription AUSTRALIA’S FIRST BANKNOTE 100th ANNIVERSARY and the dates 1913 – 2013 are portrayed on the coin.

Two official Australia Post stamps with denominations of 60c and $2.60 complete this set. The 60c stamp depicts the numbering ceremony in 1913 and the $2.60 stamp depicts the Australian Coat of Arms as it appears on the first banknote.

Accompanied by a numbered Certificate of Authenticity, the coin and stamps are housed in a display case and wonderfully illustrated box-shipper featuring the official Australia 2013 FIP World Stamp Exhibition logo.