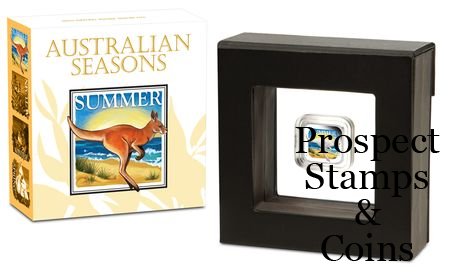 Australia has some of the world’s most spectacular and unspoilt coastal scenery in the world, with kilometres of spell-binding beaches, blue-green sea and white sand. Every season in Australia is more beautiful than the next and this beauty has been captured in brilliant colour by The Perth Mint’s Australian Seasons series.

As the first release in this new series, summer takes place in the months of December, January and February. Hot days, endless blue skies and beautiful beaches are a hallmark of this season.

The kangaroo is the most iconic of all Australia's animals, instantly recognised as a symbol of Australia.

The coin is housed in a presentation case with a themed, customised shipper and is accompanied by a numbered Certificate of Authenticity.