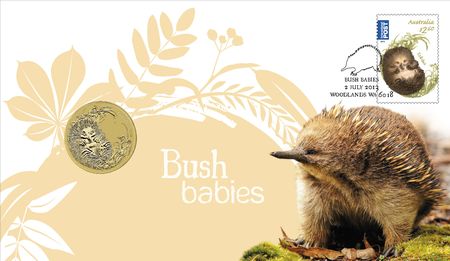 The coin and stamp both feature the echidna. Native to Australia, the echidna is recognised by its spiky coat and rambling walk.
This endearing mammal has a long snout which functions as both a mouth and a nose, and feeds by using its long, sticky tongue to collect food.
The echidna has very short, strong limbs with large claws, which make them powerful diggers.

The coin’s reverse depicts an irresistible image capturing the innocence of the baby echidna.