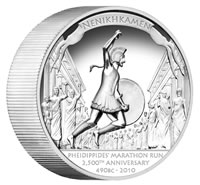 According to tradition, 2010 marks the 2,500th anniversary of Pheidippides 25-mile run to Athens with news of the Greek army's historic triumph at the Battle of Marathon. His remarkable long-distance achievement inspired the introduction of Olympic marathon running in 1896, and has also influenced countless ordinary joggers to attempt the grueling 42.195 kilometers (26.22 miles) at one of today's many high-profile marathon events.

This anniversary commemorative is struck by The Perth Mint in high-relief from 1oz of 99.9% pure silver in proof quality.