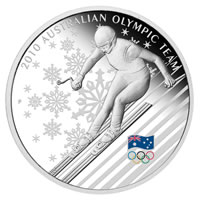 Australia has competed at the Winter Games since 1936, and has medalled at every games since 1994. Australia is the only southern Hemisphere nation to have won gold. Australias interest in the Vancouver 2010 winter Olympic Games is already red hot. Accomplished at aerial skiing, ski cross and snowboarding, our latest team has a great chance of adding to Australia's impressive medal tally.This official commemorative coin represents a well deserved tribute to all our 2010 Australian Olympic team members who have won the right to compete in Canada in February 2010. This 1oz silver proof coin has a limited mintage of only 5,000 coins and is presented in a presentation case and come with a numbered certificate of authenticity.