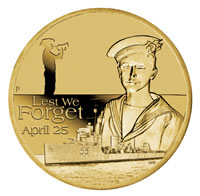 The Perth Mint's has released the second of its annual ANZAC Day dollar coins paying tribute to all those who have served or are currently serving with the Royal Australian Navy. For close to 100 years, the men and women of the Royal Australian Navy have displayed extraordinary professionalism, discipline and courage. Whether in wartime or on peacekeeping operations, they have served with honour, fully supported by a nation proud of its Navy. As well a recognising their enormous achievements, this coin also symbolises the nation's extreme gratitude to those sailors who have made the supreme sacrifice. The coin's reverse portrays HMAS Parramatta, a 'River' Class Torpedo Boat Destroyer built for the Royal Australian Navy before World War I and the image of a Leading Seaman from the same era. With a silhouetted bugler in the background. It is presented on a colourful presentation pack.