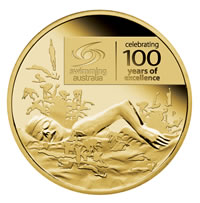 Swimming has been a major part of Australia's lifestyle for many years and the support of swimmers at major events is true testament. Swimming Australia has overseen this and has played a pioneering role to produce many great champions and Olympic Gold Medallists. The Perth Mint has released a One dollar bronze uncirculated coin to celebrate the 100 years of Swimming Australia. The reverse design on the dollar bronze coin has the official 100 years of excellence logo and a freestyle swimmer.