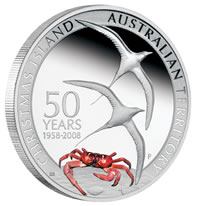 Christmas Island is located in the Indian Ocean approx. 2,650Km north-west of Perth and under Australian jurisdiction, more than 60% of the Island is now protected for the benefit of its many unique and unusual species and the preservation of their habitat.

The coin's design depicts the Golden Bosun bird, which is unique to Christmas Island, and a coloured large Red Crab. Millions of Red Crabs migrate annually from the rainforest on Christmas Island to the ocean.

The 1oz silver proof coin is limited to no more than 5,000 silver coins and is presented in a teal coloured presentation case.

Each case comes with an illustrated box - shipper and comes with a Numbered Certificate of Authenticity.