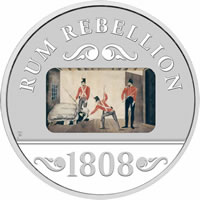 The Perth Mint has released this special silver proof coin to commemorate the 200th anniversary of the Rum Rebellion in Australia.

The 1oz silver coin resembles Australia's first official coinage - The Holey Dollar and Dump, which was introduced in the aftermath of the famous Rum Rebellion.

The mintage of the holey dollar and dump coin set is limited to only 3,000 coins.

Each coin comes with a numbered certificate.