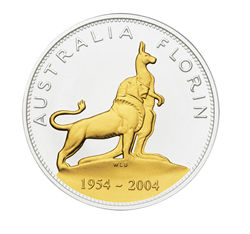 When Her Majesty Queen Elizabeth II arrived in Sydney on the 3rd February 1954, she became the first reigning Monarch to visit Australia. A significant milestone in Australian history, the 1954 Royal Visit was celebrated with the issue of a commemorative florin, one of only four produced in Australia between 1927 and 1954. The coin's unusual reverse, by William Leslie Bowles, depicts a British lion and Australian kangaroo standing shoulder to shoulder. Issued to coincide with the 50th Anniversary of the visit, this Australian legal tender coin, struck by The Perth Mint from 1oz of pure silver, features a reproduction of the 1954 florin design on its reverse. Further numismatic appeal derives from the selective use of 24-carat gilding on the coin's reverse and obverse. Mintage has been set at 12,500 individual Royal Visit 50th Anniversary Florins. The coin's blue, flag-shaped presentation case is a reminder that during her visit, the Queen signed the Australian Flags Act. Each coin is accompanied by a Numbered Certificate of Authenticity.