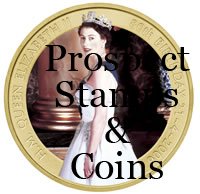 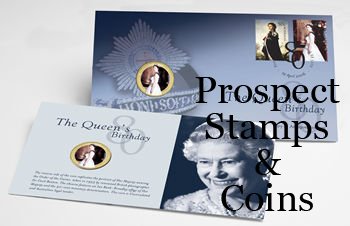 The Perth Mint produced a special coin from aluminium bronze in uncirculated quality and is incorporated in this lavish Stamp and Coin Cover. The coin's reverse depicts Sir Cecil Beaton's famous 1953 photograph of the Queen wearing the Order of the Garter. The words H.M. QUEEN ELIZABETH II 80th BIRTHDAY 21-4-2006 appear in a ring around the coloured portrait. The coin is mounted in a card featuring a contemporary image of the Queen and an 80 year-old picture of her parents - the future King George VI and Queen Elizabeth - admiring their first child. The envelope, which features a circular window to reveal the coin, also displays two Australia Post stamps. The $2.45 stamp depicts Beaton's 1953 image of the Queen, while the 50c stamp bears portrait painter Pietro Annigoni's first picture of Her Majesty, originally unveiled 50 years ago in 1956. The stamps are both postmarked with a first day of issue cancellation bearing the date 19 April 2006.