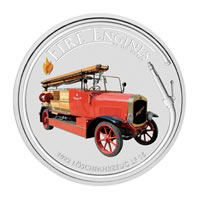 This is the fifth fire engine of the world coin release by the Perth Mint. The LF-15 was designed to carry nine firemen and the driver, its pump could deliver 1,500 litres per minute. The fire engine is portrayed inside a stylised fire hose and the words FIRE ENGINES OF THE WORLD.The coin's obverse depicts Raphael Maklouf's effigy of Her Majesty Queen Elizabeth II. Each coin is housed in an eye-catching red presentation case accompanied by a numbered Certificate of Authenticity. Each case comes within a shipper depicting stylised images of fire Fighters and is limited to only 5,000 coins.