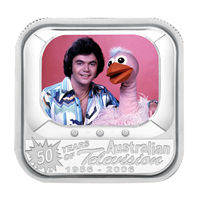 From Channel Nine comes the first television programme in Australia. Station TCN presents: 'This is Television'. Good Evening and Welcome to Television.

So began the remarkable history of TV broadcasting in Australia. Fifty years on, The Perth Mint is celebrating the outstanding achievements of the Australian television industry with this unique and memorable 'lenticular' coin. Struck from 1oz of 99.9% pure silver in proof quality, the square-shaped coin's reverse represents an early television. As the coin is moved, its lenticular 'screen' depicts a sequence of coloured images relating to favourite Australian television programmes and personalities since 1956.

The six coloured lenticular images, which 'morph' miraculously from one to another as the coin's viewing angle is changed, portray:

• Graham Kennedy - the 'King' of Australian television;
• Playschool - the logo from the iconic children's programme;
• Skippy - the famous 'bush kangaroo' and his human companion, Sonny;
• Countdown - the logo from Australia's most influential pop music show;
• The Movie Show - the logo from the long-running film review program;
• Hey Hey It's Saturday - the show's host Daryl Somers and his sidekick, Ossie Ostrich.

Each coin is housed in a spiral-bound presentation booklet examining the appeal and greatness of each television icon portrayed on the lenticular reverse. Accompanied by a Numbered Certificate of Authenticity, the booklet comes in an outer cover depicting a family watching an early television set in the 1950s. This special release is limited to only 12,500 coins.