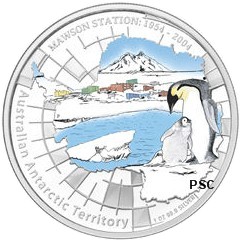 The Perth Mint has released a silver proof commemorative coin celebrating the 50th anniversary of Mawson Station. Named in honour of Douglas Mawson, who did more than anyone to establish Australia's tradition for scientific, geographic and hydrographic research in the world's highest, driest, coldest and windiest continent. Australia has a proud history of exploration and scientific research in Antarctica. Mawson Station is now 50 years old, it is the oldest continually operating station south of the Antarctic Circle, named in honour of Sir Douglas Mawson. The coin is struck from 99.9% pure silver in proof quality with colour incorporated in the reverse design, with a limited worldwide release of only 7,500 coins. The coin portrays an Emperor Penguin with its chick, symbolic of two colonies living near to the station. Issued as Australian legal tender. All coins are individually packaged in a blue lacquered metal presentation case, accompanied by a Numbered Certificate of Authenticity.