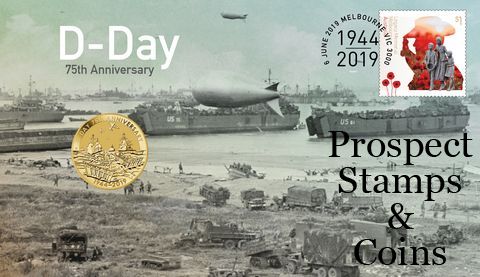 Marking the 75th anniversary of World War II’s D-Day, this commemorative stamp and coin cover is a meaningful tribute to the lives lost in the momentous Battle of Normandy.

The largest combined naval, air and land military operation in history, the Battle of Normandy was launched on 6 June 1944. Referred to as D-Day, it involved the coordinated landing of some 156,000 allied troops on five beaches along the heavily fortified coast of Normandy, France.

Issued as Tuvalu legal tender, the uncirculated base metal coin is housed in thoughtfully considered card featuring photographs of the operation.

The coin’s reverse design depicts allied troops being ferried in large military ships towards the coast of France, where soldiers landed at coordinated locations along an 80-kilometre stretch of beach. Bomber aircrafts accompany the fleet in the sky.