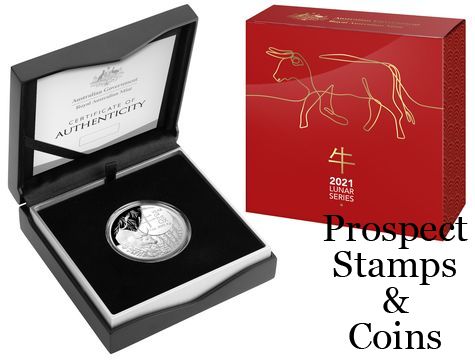 The Five Dollar Domed coin celebrates the 2021 Year of the Ox in the Chinese Lunar calendar, featuring a magnificent obverse design of the twelve-year lunar calendar wheel.

The Ox is the second sign of the twelve-year lunar calendar; this reflects the traditional story of how the Jade Emperor had the twelve animals of the zodiac race across a river to decide what order they would go in.

The industrious Ox was likely to win, but clever Rat hitched a ride on the Ox's head and jumped off to claim first place.

The humility and patience exhibited by the Ox is said to be characteristics of people born under this sign.

The coin design on this silver domed coin, the Ox is depicted in an active and busy stance, surrounded by the branches of the willow which represent humility

The coin is presented in a display case with a red outer box.

Comes with a certificate of Authenticity.