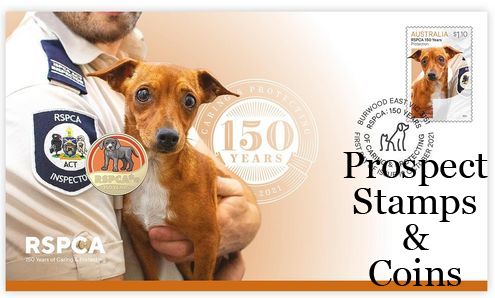 A playful puppy adorns this colourful coin, recognising the 150th anniversary of the Royal Society for the Prevention of Cruelty to Animals (RSPCA) in Australia. Commonly referred to as ‘man’s best friend,’ dogs are often considered part of the family and play important roles in society too. This unique coin means you can take your four-legged friend everywhere you go!

The puppy coin is unique, with a colourful eye-catching design and will appeal to dog lovers, coin collectors and animal devotees.

The RSPCA: 150 Years Dog postal numismatic cover is highly collectable, featuring a pictorial envelope with the $1.10 Protection stamps from the stamp issue and a coin from the Royal Australian Mint.