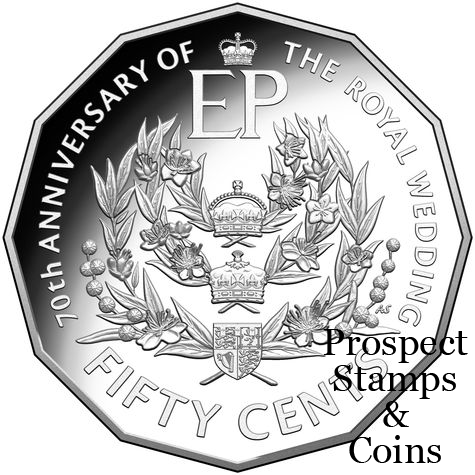 Her Majesty Queen Elizabeth II and His Royal Highness Prince Philip, The Duke of Edinburgh, will celebrate their 70th wedding anniversary on 20 November 2017. The family that they have built during their 70 years of marriage represents a part of their enduring union.

The Mint has chosen to combine the ancient visual languages of heraldry and floriography to portray the ancient lineage of the British Royal family and the abiding line of succession of the House of Windsor.

The royal couple are represented by their monogram ‘EP’ while wreaths of myrtle represent their children, grandchildren and great grandchildren. Each wreath is pinned by the heraldic symbol of the Princes in the direct line of succession: The Prince of Wales Charles, The Duke of Cambridge Prince William and Prince George of Cambridge. The remaining royal family are represented by myrtle blossoms, an ancient symbol of marriage and love. Sprays of wattle, each with seven blossoms, represent the royal couple’s seven decades of marriage.

The Coin’s reverse features a symbolic representation of the royal couple, their children, grandchildren and great grandchildren.