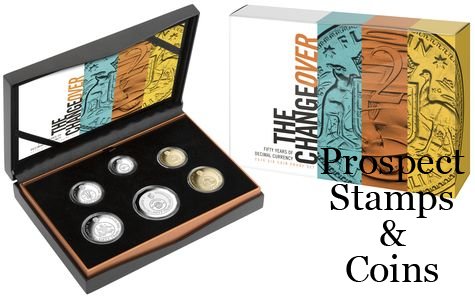 On the 50th anniversary of Australian decimal currency, the Royal Australian Mint’s annual Six Coin Proof Set is both a memento of 2016 and a poignant reflection on the special place that coins have in Australian history. The beloved circulating designs of today are joined by depictions of Australia’s pre-decimal coins on the obverse celebrating then and now.

The first coins ‘minted’ in Australia were created by removing a piece from the centre of a Spanish dollar, forming two separate coins known as the Holey Dollar and Dump.

The gold rush of the mid-19th Century resulted in many unofficial tokens and ingots until the Sydney Mint opened in 1855, producing sovereigns which were largely identical to their British counterparts.

On 14 February 1966, the changeover to decimal currency transformed the nation, as Australia joined a worldwide currency trend. The uniquely Australian images of the decimal coins are still cherished on their 50th anniversary.

A celebration of the 50th anniversary of decimal currency in Australia.

As a tribute to Australia’s coin history, each coin features depictions of coin designs from today and years past