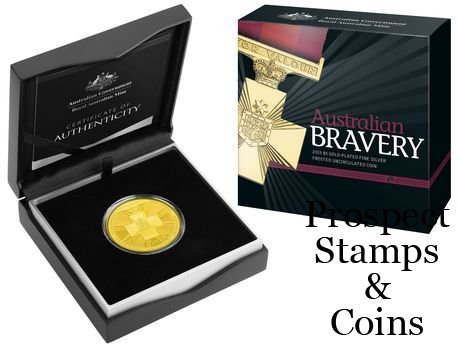 On the 40th anniversary of the Australian Honours System, this coin acknowledges the awe-inspiring bravery of those who have been awarded the Cross of Valour and the George Cross.

On 14 February 1975, the Australian Honours System was introduced to acknowledge the most outstanding contributions to the nation. In addition to the Order of Australia (for achievement or meritorious service to society) and the National Medal (which recognises 15 years of conscientious contributions in the police, defence or emergency services) are the Australian Bravery Decorations.
These prestigious decorations are awarded to recognise acts of incredible bravery and selfless heroism.

Prior to 1975, these acts of bravery were acknowledged with the George Cross.
With the establishment of the Honours System, the Cross of Valour has been awarded in its place to honour “acts of the most conspicuous courage in circumstances of extreme peril.” In the 40 years that have passed, it has been awarded to five people, whose courage and bravery continue to inspire us today.

Obverse features the George Cross, the names of its 22 recipients and the Queen Elizabeth II effigy sculpted by Ian Rank-Broadley.