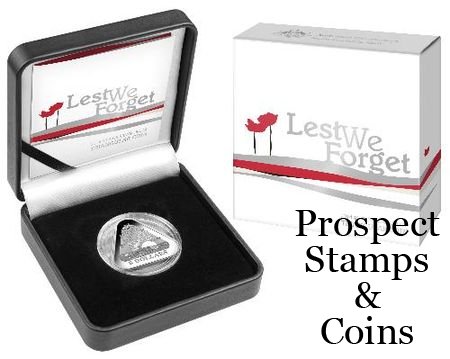 With the notable theme of Lest We Forget and the forever symbolic dawn scene, this spectacular coin pays tribute to all of those whohave stepped forward to serve.

At the going down of the sun and in the morning,
We will remember them.

These stirring words from the iconic poem For the Fallen, by Robert Laurence Binyon, are emblazoned across the coin reverse,
which depicts a peaceful dawn over silent Fields of Flanders poppies. These flowers have long been the international symbol of
the 11 November 1918 armistice; and later a token of remembrance for those who have died in conflict since the Great War.

The sleek lines, intricate engraving and a frosted finish contribute to the design’s contemporary feel. The triangular shape of the coin is a testament to the Royal Australian Mint’s dedication to push the boundaries of innovation.

What is more, the sell-out success of the Royal Australian Mint’s inaugural triangular coin, which commemorated the 25th
anniversary of Parliament House, highlighted the public’s extreme enthusiasm for these unusually shaped coins.