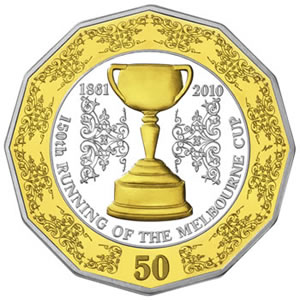 To commemorate the 150th running of the race that stops a nation, the Royal Australian Mint released a two coin 50c gold plated silver proof set.

This race has grown to become one of the biggest annual sporting events in Australia and one of the most prestigious horse races in the world. The 1861 race had seventeen starters and was run before a crowd of 4000 spectators. Today, it is broadcast to an audience of around 700 million people worldwide.

The Melbourne Cup has become such an integral part of Australian culture that it is almost impossible to imagine the country without it. Since 1861, the world’s greatest 3200 meter handicap horse-race has been run every November.

The designs on the reverse of the coins in the selectively gold plated silver set feature two of the most enduring emblems of the Melbourne Cup; Phar Lap, who was the favourite in three consecutive Melbourne Cups; and the Cup itself.

This set has a limited mintage of only 5,000 sets being produced.