2008 Masterpieces in Silver - Flying Through Time 4 Coins in Case 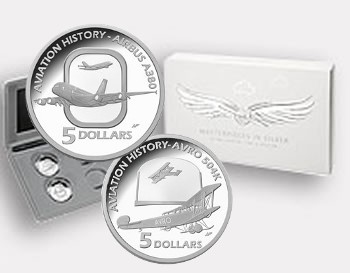 The Masterpieces in Silver series was produced from 1988 to 2011 and was the longest running series produced by the Royal Australian Mint. This long running coin series was dedicated to Australian themes and events that have shaped Australia as a nation - Flying through time Aviation

The first release in 2008 honoured two diverse Australian passenger aircraft: The oldest aircraft, the Avro 504K to the newest aircraft–the Airbus A380

The Second release in 2009 honoured two memorable aircraft: the De Havilland DH 86 used to initially fly the mail route from Darwin to Singapore and the Lockheed Constellation L749 which flew the famous 'Kangaroo Route' from Sydney to London.

To complete this set, you need to purchase 2010 part three shipper.