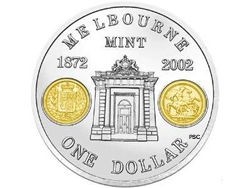 The Royal Australian Mint celebrates the 130th Anniversary of the Melbourne Mint and its long history the mint has in producing Australia's and the British commonwealth early currency.

The Melbourne Mint was established in 1872 due to large amount of Gold that was being extracted from the goldfields of New South Wales and Victoria.

This coin is the latest in the series and is unique in that it is the first coin from the Royal Australian Mint to feature gold inlays or 'cameos' as part of its design. The coin has two tremendous designs depicting the first two coins released from the mint after it opened in 1872.

They are the St. George and the Shield sovereigns. The sovereign cameos are struck from 24 carat gold and are inserted into the coin.

The coin is minted from 99.9% pure silver and is struck to proof quality.

This wonderful design is a limited edition proof coin as is housed in a black case.