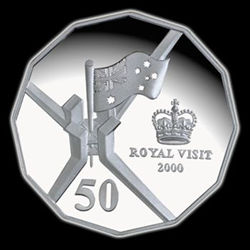 For the first time since 1936, and the very first time ever on decimal coinage, the effigy on an Australian coin has been designed by an Australian! This special effigy features only on this 50c Royal Visit Coin and its circulating coin equivalent, making it the only coin in Australia with a new effigy of Her Majesty. Special permission was obtained from Buckingham Palace to use this effigy, designed by Royal Australian Mint designer Vladimir Gottwald.Vladimir also designed the reverse of the 50c Royal Visit Coin, which features the Australian national flag flying above Parliament House next to St Edwards Crown. A royal red case houses this magnificent fine silver proof coin, which fits into an outer box featuring an embossed image of St Edwards Crown and a ghosted image of the Golden Wattle, Australias national flower. Each coin comes with a numbered certificate of authenticity stating the total mintage as 25,000. This 50c Royal Visit Coin has aroused considerable interest in other Commonwealth nations.